What is in a name? Carols vs Songs

Is it because I am a philologist that I find it rather irritating when people use “carol” when they mean “song”? (Do I hear cries of “Pedant!”??) Perhaps, but let’s be clear: Ariadna’s version of “Last Christmas” by George Michael, on this year’s Christmas Party list (see below), is most definitely NOT a Christmas carol! Let’s start with the facts:

The Oxford English Dictionary definition, which I’ve used in this site’s interactive dictionary, refers to folk songs, as many carols have their origins in popular worship, long before the days of universal musical education. But the ecclesiastical focus of these carols is, I would argue, undeniable. So while a particularly precious English tradition, especially in villages, is to gather in the 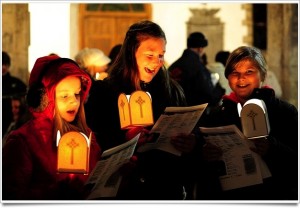 street to sing carols, these days they are often combined with songs, especially children’s favourites such as Jingles Bells and Rudolph the Red-Nosed Reindeer. You don’t hear those songs in churches (not mentioning the main character of Christmas, and all that) and they are what make street events more informal and, dare I say it, fun. (For the record, I still love a traditional, candlelit carol service in church, especially where there is an organ involved.)

It is this which also makes carols different from traditional Catalan “Nadales”, as I point out on my choir’s website, writing about the Coral Shalom’s Christmas concert, at which we are singing both contemporary English Christmas Carols by John Rutter and traditional Nadales. I refuse to translate “carol” as “nadala” (either in the concert programme or the website), which caused bemused expressions at first… It is true that many carols, like nadales, have popular/folk traditions, but the style of carols has generally evolved over the centuries from a simple melody and in most cases everyone knows the long-established harmonisations (that said I myself have written a more modern arrangement of Silent Night (Santa Nit) for piano, so I am perhaps in danger of blurring the very lines I seek to highlight).

But let’s not get confused. Christmas carols are religious, generally more formal, and certainly not pop music. Christmas songs are informal, secular and popular music – equally valid, especially if they raise people’s spirit at this special time of year. Or at least if they make one think and appreciate what we have, as is the case of one of my favourite, if somewhat twisted, songs, Fairytale of New York (The Pogues Featuring Kirsty MacColl).

So, let me get to the original purpose of this post, before I decided to turn it into a socio-cultural-linguistic debate. The Christmas Party list of songs and carols to read the lyrics for, check the meaning and practice. We will, of course, sing and play more carols and songs, including last year’s Twelve Days of Christmas, but we’ll focus on these ones for practice. I’ve included lyrics and YouTube videos or audio right on this page, below, just click on “Show Lyrics” to see them. Enjoy and don’t forget, if you play an instrument, please bring it next week! See you then!

Here’s one of my favourite artists singing it – Michael Bublé:

Here’s the boy’s choir of Guildford Cathedral (my hometown) singing a more traditional version of Silent Night, though with a different organ arrangement. Just click the play button to hear it.

Here’s Ariadna Grande’s version of George Michael’s classic…a bit superficial for my taste, but we have to roll with the times! The video below has the lyrics on-screen so you can follow along. If you want to see her singing it live, click here.

«Amazing hidden cake designs…
Holy Week Diary»
I call this the "bible" of grammar. It will serve you for life and is very well laid out and good for both self-study and to accompany a class. This is the Intermediate book (covering up to upper-intermediate, or First Certificate) but unless you are going for the Proficiency exam, it is still a very useful book. As I always say, if you know everything that's in here you're doing very well!